I joined the Skyline Hikers of the Rockies again, at their camp at White Man Pass on the Continental Divide, situated at the border of BC and Alberta in the heart of the Canadian Rockies.  The weather was forecast to be Rain, Thunderstorms and Light Rain but in the end the week was only slightly damp, with temperatures between 2C (at night) and 15C on the hottest day.  Good hiking weather.

Read on for more or go directly to the pictures.

We left Banff at 8:15 am and were driven south in two old school buses, via the Vermilion Crossing parking lot (vital bathroom break) and on to the forestry service road East of Radium Hot Springs, BC.  A dusty hour and a half later we arrived at the trail head.  The forecast for the week was rain, thunderstorms, light rain and snow but by the time we unloaded from the bus the weather was cool and cloudy, with no rain – ideal for the 4 km tramp up into camp. 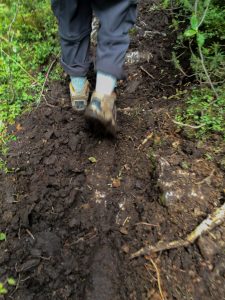 We shared part of the trail with the pack horses, so we were slopping through the corduroyed mud in places!

As part of the negotiations with the BC Government and Banff National Park we cannot display exactly where we were camped or where our hiking trails took us.  However, our base was just about 70 m/250′ below the Continental Divide, at White Man Pass on the border between BC and Alberta.  By 2018, if you were to fly over the area, you would see no trace of the camp as the ground is reseeded, the trail flags are taken down and the trails swept over at their start, to discourage other hikers from getting lost in the mountains!

A lot of work goes into arranging the five one-week camps, including contracting outfitters to take our packs up to camp and cook for us, obtaining permissions to camp, setting up biffies, arranging to drain grey water, filtering water from the stream for drinking, setting up solar panels for the electric fence, etc.  It is all very well organized – as one would expect after 83 years of club activity! 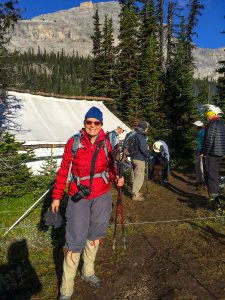 The Currie Saddle Loop hike was billed as an intermediate hike of 9 km with 450 m elevation gain.  This was inaccurate!  We ended up classifying it as an Advanced, Technical 8-hour hike of about 16 km with something like a 900 m elevation gain (this is net – we had lots of ups and downs).  Luckily the weather mostly held for us and we had a very pleasant cool day, with threatening clouds that passed us by.

This hike took us over the Continental Divide into Banff National Park, across to Mount Currie Saddle (2,340 m/7,677′), up and over to the west (around 8,000′) where we came down via Orange Gully and back to camp.  We had three technical challenges: a downhill scree of large rocks up to three feet high, a very steep uphill scree of slippery small stones and another downhill rockfall with stones the size of a man’s fist – nothing you could put your feet on in a stable way.  Each of these screes took about half an hour each.  At one point it was suggested that we “find a comfortable contour” to make our way about 750 meters from one shoulder to another.  This means walking like a haggis around the mountain for rather longer than is, in fact, comfortable.

At 3,618 m (11,870′), Mount Assiniboine is the highest peak in the Southern Continental Ranges of the Canadian Rockies.  It sits on the BC/Alberta border and is stunning to see – once the clouds clear.

There is nothing like being up in the high alpine, well above the tree line, with the occasional meadow of flowers but mostly surrounded by rocks and primordeal mountain building.  We saw bear scrapings – where they haul back the ground cover looking for bugs and small creatures to eat, as well as newly deposited bear scat.  We saw one bear set, where they would have spent the winter, insulated by the snow. The main views were magnificent and at one point we could see east over to the Spray River Valley, where we hiked last year.

Shortly after we left camp one of our group found that the sole of his boot was coming off. Another fellow just happened to be carrying an awl and strong waxed thread such that he was able to sew the sole back on the boot when we stopped for lunch.  It pays to be prepared!

Cross Lake fed the very small stream/rivulet from which we obtained our (filtered) drinking water.  The gentle hike rose 210 m (700′), past Cross Lake and up onto the shoulder.  It was a rather damp, cloudy day but an enjoyable walk after the previous day’s excursion!

Azure Lake is an incredible colour that I was not fully able to capture because of the changeable cloudiness of the day.  The lake seemed to change hue as we descended down to surface level from White Man Pass.

There is a natural bridge across the end of the lake, which emerges as a river on the other side of the bridge, about 50′ below the level of the main body of water.

A common plant at that altitude is something aptly called Hippie On A Stick.

On Friday a couple of us decided to revisit the Mount Currie Saddle, but not do the full loop around and back to camp.  Several others joined us as we took a slightly different route but ended up at the Shoulder for lunch, with fabulous views north west and south. We also saw east to the Spray Valley, where we had camped and hiked in 2015.

of the week we got our packs ready for the outfitters to take them back to the trail head.  The easy 4 km hike back down (330 m/ 1,100′) took us to one of the buses, which had been left unlocked for us all week – in case we came down in rain!  We waited a few hours for the third set of horses to bring the final packs down and then we started the three hour drive back to Banff.
In the evening many of us got together for a final dinner (no showers allowed beforehand) before heading back to various parts of Canada, the US and Holland.

Camp was set on a small plateau surrounded by White Man Pass, White Man Mountain and Red Man Mountain.  I shared a tent with Marilyn, and with Katy the Camp Musician – so we had a special “Musical Notes” flag at the entrance to the tent.  The wood stoves were a little hard to light as the wood was a bit too freshly cut, but they kept us warm in the evenings before bedtime. The tent poles are cut from nearby trees.

There are five weeks of camp, with varying numbers of people at each.  The numbers increase as we get into August – better weather then! Camp 5 was a small village of 56 wonderful people.  You could abandon your camera on its tripod in the middle of the village green and know that it would be there when you get back – or get rescued by whoever was passing if it happened to start raining. You cheerfully brushed your teeth around the communal grey water tank along with whoever happened to be there. We had all the mod cons! 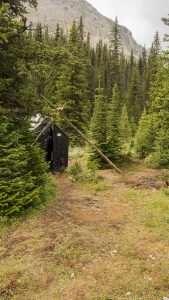 Every afternoon, after we are all back from our hikes, we get together on the village green and have a drink and a chat.  Hiking boots off, warm clothes on as the sun goes down.

The camp is surrounded by a solar-powered electric fence to keep out bears. The hot water is restricted to use for cooking by the outfitters, except for late afternoon, when we get to wash up – if there is enough water and we are back in time! Drinking water came from a tiny stream, filtered to potable quality.  The stream ran dry towards the end of camp but we managed without water for about 12 hours till it started running again.

Once again it was a fabulous week and I am already looking forward to next year!